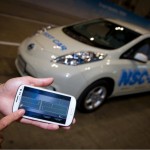 First it was Nevada then Florida and now California. Last week it became legal to test Driverless Cars in California. That is a big step towards the inevitable: AFFECTS (Automobiles that are Fuel Friendly Easy on Carbon and Traffic Safe).

As I mentioned in an earlier post Auto Auto℠ by Google, a major investor in the driverless car movement is Google. In October of last year Nissan revealed a driverless Leaf prototype that could be at your neighborhood dealer by 2015.  The other auto companies are right behind adopting smart car electronics much quicker than expected. I am betting that Auto Auto℠ will be legal in all 50 states and that at least 10% of new cars sold will be Auto Autos℠ by 1/1/2022. That is a real bet. It is against my brother who is betting on 2017. It looks like I might loose that bet which would be OK with me. The sooner we can reduce the ridiculous number of traffic fatalities (about 30,000 per year) in the US the better.